Scripts for the Blind: The Case of W.H. Murray in 19th century China

The role of missionaries in 19th century discourses around disability, particularly in colonial spaces, has always been significant (see Esme Cleall’s work, for instance). For the colonial administrations, missionaries served as proxies for the state and provided spaces and roles for (some) disabled colonial subjects, allowing the colonial state to operate a traditionally ‘laissez-faire’ attitude to its colonial subjects–particularly in non-settler colonies. For the missionaries themselves, disabled colonial subjects were perceived variously as ‘opportunity’ and equally as ‘worthy’ classes of the poor (and therefore as worthy converts). As one missionary commented rather cynically in an archive I used for my book: ‘Their exigency is our opportunity’.

Perhaps one of the more interesting aspects of this relationship has been the work that blind students and missionaries undertook to devise various scripts for the blind across the spaces of Empire. In this blogpost, I would like to examine the story of the Murray script for the Chinese blind at the intersection of missionary, colonial and disability histories. 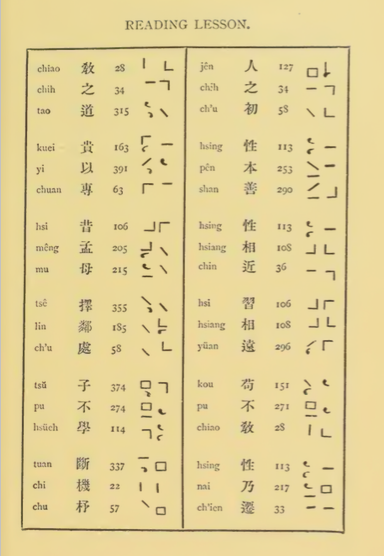 A Protestant by faith, W.H. Murray arrived on his prosletysing mission in China in 1871.[1] Murray himself was disabled, having lost his left arm as a child of nine when he got caught up in machinery in a sawmill. [2] When he arrived and settled in China, he was supposedly struck by the pervasive nature of blindness in the Chinese population. 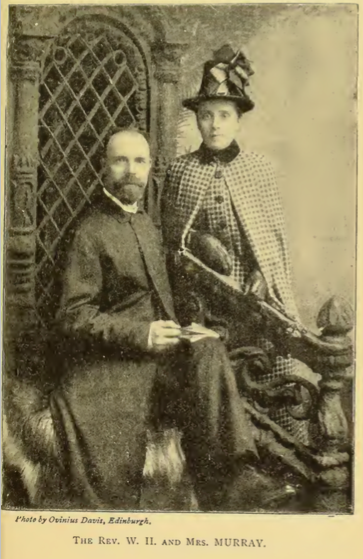 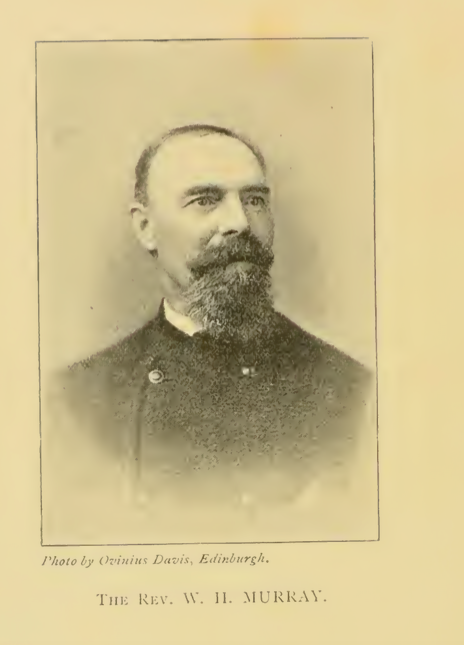 ‘One of the first things which deeply impressed him (as it must impress every traveller who looks around hum in the densely crowded streets of Chinese cities) was the extraordinary number of blind men who mingle in every crowd, some going about alone, or guided by a child; others in gangs of eight or ten, each guided by the man in front of him, while the leader feels his way with a long stick…A gentleman assured me that he had on one occasion seen no less than 600 miserable blind beggars all assebled to share a gratuitous distribution of rice.’ [3]

Contemporaneous European discourses around blindness in China drew on infectious diseases to explain the prevalence of blindness—these included leprosy, smallpox, ophthalmia. Poor personal hygiene and public sanitation were also identified as possible causes, as wew ‘stifling dust and smoke caused by the lack of ordinary fuel, which leads the people, all through the long, parching summer, to cut every blade of sun-dired grass, and turf sods, to heat their ovens’.[4] As in India, missionaries also sought to identify racial and social pathologies for blindness in China—in this instance accusing Chinese parents of ‘purposely blind(ing)’ their children in order to make a living as fortune-tellers.

In 1879, Murray devised the Numeral-Type system for educating the blind. The Murray script used a system of embossed dots similar to Braille and grouped them in varying combinations and units to represent numbers and then each of those numbers then were used to signify the 480 sounds that the missionary had identified in Mandarin Chinese ‘as spoken to Peking’.

Any two of these symbols placed together represent tens, e.g. 4 0 = 40 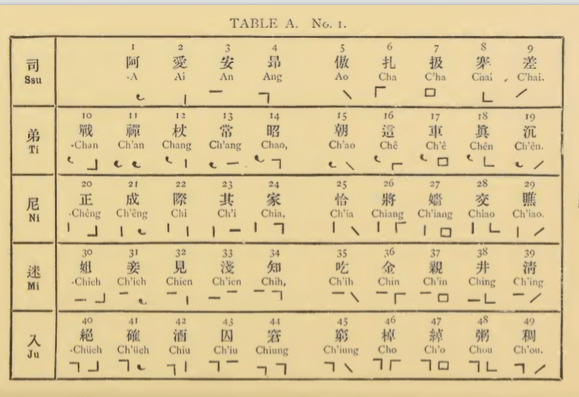 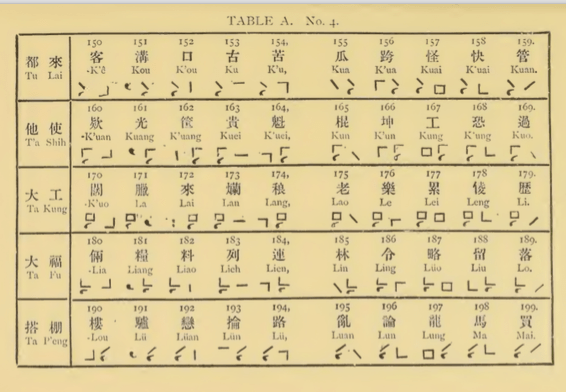 As with most of these missionaries, Murray worked on the script with local contributors and interlocutors. In this instance, Murray worked with a blind Chinese beggar and a ‘native colporteur’. One of the first Chinese interlocutors that Murray worked with to test his system was described as ‘Mr Wang’, a ‘poor old, blind man…who was crippled with rheumatism, and like to die of want’. Murray worked with Wang and the latter ‘…was able to read the Holy Word for himself.’ Wang was soon joined my a younger man, ‘Mr. Lee’ who was brought to the medical mission after having been severely wounded by a mule. Lee took to the system even more rapidly than Wang, and apparently learnt how to read with the Murray script within two months.[5] 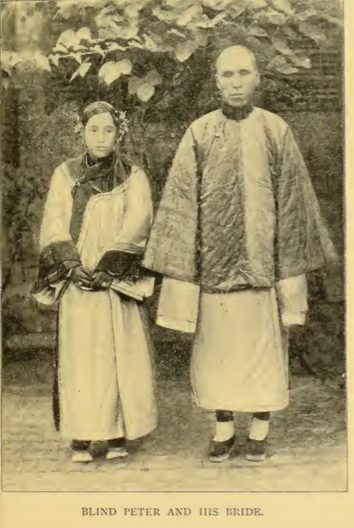 As in other blind schools across the world, Murray’s students themselves became teachers in the schools upon their graduation. One example of this was ‘Blind Peter’, who became the ‘head of affairs at the school and has proved the best teacher we could have, in pushing the boys forward’.[6] Peter was also adept with music, and had written out over 400 hymns in the Murray script in addition to serving as the regular organist of the London Mission Chapel. Missionaries reported that Peter was, in addition, ‘a very earnest and persuasive preacher’. Peter would also marry a ‘pleasant sighted girl’ who had been brought up in the American Presbyterian school.[7] Peter was held up as an exemplar of what Christianity and the mission could for the blind Chinese. 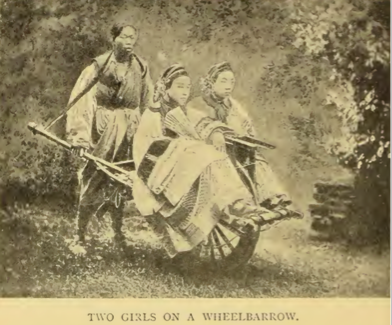 Yet, Murray’s students were not uniformly successful. His very first student was named Sheng and despite his ‘hopeful prospects’, accounts of Murray’s school report that Sheng left the school and was ‘decoyed away by a wandering blind minstrel, and though, after a while, he returned to his benefactor expressing much contrition, and was once more received into the school, he was found to have suffered such complete moral shipwreck, that for the sake of the others, his expulsion became necessary.’ Murray eventually began accepted female students into the school, although they had a separate Girls’ School. This was considered a particular success, since women were considered the spiritual gatekeepers to their families, and ‘until the women of china can be won for Christ, we can never hope for a very general conversion of the men’. 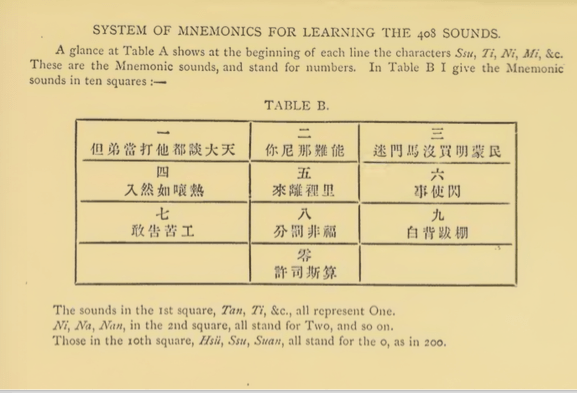 Although intended for the blind, Murray’s script became a bridge between blind and sighted students and inmates at missionary institutions. For missionaries working in China, the complexities of learning Mandarin itself became an important reason to teach the Murray script to both the ‘sighted and the blind’[8] As Cummings noted in her book on Murray: ‘A sighted Chinaman learning to read his own book must be able to recognize at sight AT LEAST FOUR THOUSAND COMPLICATED CHARACTERS (emphasis in original).’ However, despite the claims to universality, Murray’s system was confronted with criticism by other missionaries in China—particularly the claim that the Murray script could be taught in parts of ‘non-Mandarin’ parts of China. [9]

[5] Constance F Gordon-Cumming, The Inventor of the Numeral-Type by the Use of Which Illiterate Chinese Both Blind and Sighted Can Very Quickly be Taught to Read and Write Fluently, London: Downey and Company 1899., p.23.

[8] Constance F Gordon-Cumming, The Inventor of the Numeral-Type by the Use of Which Illiterate Chinese Both Blind and Sighted Can Very Quickly be Taught to Read and Write Fluently, London: Downey and Company 1899.