Collectively termed ‘deformity apparatus’ or ‘deformity appliances’, a number of devices for the non-normative body were being advertised and sold in increasing numbers by the 18th century. [1] Turner and Whitey use these devices to examine the increasing role of technology in transforming corporeal experiences and changes in the Enlightenment. These devices only proliferate in the nineteenth and twentieth centuries and become more widely advertised and sold through newspapers and catalogues. Certainly British colonies also reflect this trend. In the settler colonies of Africa, like Rhodesia for instance, medical device companies like E.G. Bull sold surgical instruments, prosthetic limbs, deformity appliances and trusses.

Aside from these deformity apparatus, patent gymnasiums were also being imported to South Asia, and advertised as corrective devices for physical deformities as well as providing exercise.[2] 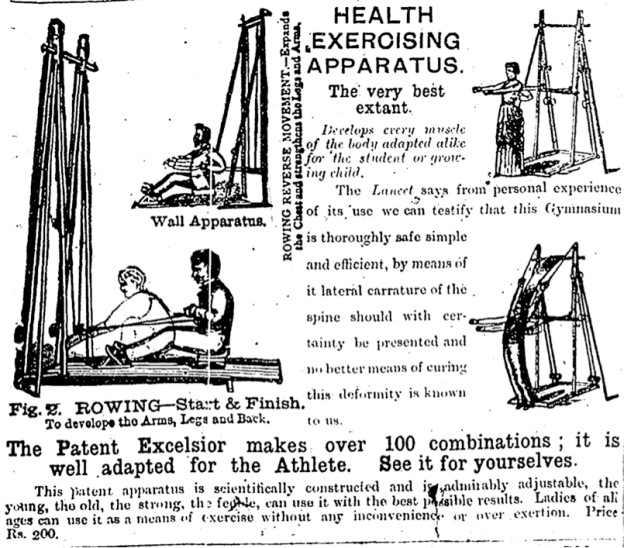 In Ceylon, ‘Skulls Okonite Trussses’, which had won awards in the Paris Exhibition and in the World’s Fair, in Chicago, were advertised in the local English newspapers. Supported by a range of testimonials from the British Medical Journal to the Lancet and the Illustrated Medical news, the advertisement prided itself on being ‘self-adjusting, light and comfortable’. Since it was believed to be inured to moisture, perspiration, rust and was thought to not cause any irritations to the skin, the truss was ideally suited to ‘travelers, colonists and residents in tropical climates.[3]Subsequent to the First World War, the numbers of firms advertising deformity appliances increase—N. Powell and Company classifieds touted their made-to-order deformity appliances in Bombay.[4] In the same city, the Bombay Surgical Company advertised the sale of trusses, belts and similar technologies that were intended to ameliorate or correct ‘club-foot, flat-foot, bow-leg knock-knee (sic)’.[5] These advertisements suggest that these technologies were intended primarily for the consumption of Europeans: given how the truss as being a ‘flesh colour, resembling ivory’. [6]

Furniture and mobility aids intended for ailing or disabled people—including crutches, invalid chairs, adjustable invalid beds and patent suspensory chairs–were also being advertised through English-language newspapers and journals. [7] Crutches with cushioned armrests were sold typically through the licensed chemists and surgical appliance stores in the region, including Bathgate and W.E. Smith and Company in Madras.[8] Army and Navy officers could and did order invalid chairs through catalogues from the metropole. These advertisements included portable recumbent invalid chairs which allowed invalids to travel across terrain and were supposed to be useful for travel as well as for the barracks.[9] Constructed of wood, invalid chairs were also available in India, although the more expensive and durable versions were constructed of brass or bronze and ran on brass casters.[10] Often imported from Europe, these invalid wheel-chairs were often resold by users, suggesting that they were both expensive and difficult to come by. As to cost, invalid beds were quite expensive and cost between twenty and fifty rupees; individual invalid chairs less so, particularly if they were secondhand—in which case, they could cost as little as four rupees. Aside from individual use, there is evidence to suggest that some institutions also bought and used such devices to provide mobility to the ‘lame and the decrepit’. During the twelfth anniversary celebrations of the ‘Refuge’, a poorhouse in Calcutta, disabled mendicants were brought to participate in the festivities on invalid chairs.[11] Wealthier South Asians who had mobility impairments could have used the palankeen, a covered bed of sorts, with a small rail all around.

[1] David Turner and Alun Whitney, ‘Technologies of the Body: Polite Consumption and the Correction of Deformity in Eighteenth-Century England’,